Jean-Claude Duvalier, formerly President-for-life in Haiti, died yesterday of a heart attack aged 63. The death of a man, forced out of office nearly 30 years ago, may not seem significant, but it matters a great deal. His death denies the victims of his regime the opportunity to see legal justice served, and allows those who wish to resurrect Jean-Claudisme in full the chance to re-write history.

WHAT’S IN A NAME?

Jean-Claude Duvalier is better known as “Baby Doc”. He inherited this nickname in 1971, along with the presidency, after the death of his father François Duvalier, or “Papa Doc”. The son was never separated from the father; A sectagenarian at his death, Jean-Claude Duvalier was “Baby” for his entire life.

Dr. François Duvalier became “Papa Doc” before his presidency, given the nickname by his patients when working as a medical doctor in rural Haiti as part of the US-led campaign against infectious disease in the 1940s. The moniker, born in Haiti, was adopted globally as his dictatorship became infamous, and “Papa Doc” became the symbol of a lurid caricature of the Haitian leader. Papa Doc was recast as a barbarian, with a lust for wanton violence and anarchy, in numerous newspaper articles, sensationalist histories, and even critically acclaimed writers such as Graham Greene in his cynical novel The Comedians.

Duvalier ruled Haiti from 1957 to 1971. His dictatorship was brutal, but he was no madman. The violence he enacted upon his people through his loyal paramilitary force the tontons macoutes, the cult of personality created by his deliberate association with the lwa Bawon Samedi, the destruction of the army leadership, they were ruthless policies designed to establish and maintain control. The intimidation of the professional classes removed many of his political enemies either through “disappearance” or exile, and resulted in the rapid acceleration of a damaging “brain drain” from Haitian shores.

Not a doctor, and looking exceptionally unprepared for presidency, “Baby Doc” felt an appropriate nickname for the portly 19 year-old. He lacked the intellect, the command, and the terror of his father, and as such his fifteen-year stay as President-for-life is often reduced to a “Baby” dictatorship; a Duvalier-lite, held together by lingering loyalty to the father and limited liberal reform.

But that is where “Baby Doc” is a misleading name. There were many developments specific to Jean-Claudisme that had a massive impact upon Haiti. They are certainly connected to the legacy of the father, but Jean-Claude Duvalier’s rule must be seen in its own right to truly understand its influence.

I didn’t know many Haitians who used the moniker “Baby Doc” to describe Duvalier. That diminished the epic evil of that regime.

Loyal to Simone Duvalier (Jean-Claude’s mother) as much as to the new president, the macoutes continued to operate, intimidate and torture, the brain drain continued as more were forced into exile. François Duvalier had operated with a degree of impunity from the USA, in part due to the vicious suppression and murder of those who were suspected of being communists (and their families), who often doubled as Duvalier’s political enemies. Nixon didn’t mind, as long as there were no communists in the Presidential Palace, and Duvalier knew exactly how to play this hand.

Washington viewed Jean-Claude as a weak leader, and placed far more pressure upon the Haitian government. The borders opened, and American business rushed in with all the trimmings. Light-manufacturing plants sprouted in the environs of Port-au-Prince, dragging impoverished farmers into the capital for a pitiful salary.

An agricultural policy disaster accelerated the internal migration, caused by an outbreak of African swine fever among Haitian pigs. It is a non-fatal disease but affects the quality of the meat. Fearing a spread of the virus to the continental U.S., The USA forced Haitian authorities to conduct a mass slaughter of pigs, insisting compensation would be made. This took the form of replacement pigs; pink, fat pigs that had been selectively-bred for centuries, so much so that they required special food and concrete flooring to survive (unlike the hardy Haitian black pig). These were luxuries few Haitian farmers could afford for themselves, let alone their livestock. The damage was extraordinary.

Many impoverished farmers headed to the capital, in the hope of getting work by any means possible. Sex tourism and the international drug trade also migrated to Haiti, those two predators of intense poverty and open borders. They brought HIV and gun crime respectively to the new slums of Port-au-Prince. Luckner Cambronne, an important lieutenant to both Duvaliers, began a policy of selling Haitian blood to America, to whoever would buy.

Why did Duvalier wholeheartedly embrace American influence? He was more interested in survival than control, and pandering to the USA’s economic demands alongside his proven anti-communism would ensure their support in the long run and strengthen his position as president by sacrificing policy leadership. It was also worth Duvalier’s while, economically. Light manufacturing and the drug trade fit well alongside the kleptocracy and cronyism of Jean-Claudisme, and Duvalier made hundreds of millions of dollars in bribes, business deals and embezzlement from the Haitian state.

Moderate social liberalisation occurred in the 1970s, as the regime was pressured on the matter by Jimmy Carter’s administration. Dissatisfied rural Haitians began to organise, and radio stations such as Jean Dominique’s Radio Haiti Inter carried the voice of protest in Kreyol. However the insincerity of these reforms was laid bare in the 1980s, after Jean-Claude was given carte blanche by the new U.S. President Ronald Reagan.Protests catalysed by the creole pig disaster were forcefully suppressed, participants were tortured, and Jean Dominique was forced into exile after gunmen stormed Radio Haiti Inter looking for him.

But the tide was rising. The brutality of macoute repression could not stop the growing anger of the population. Protests and strikes became daily occurrences, new radio stations such as the Catholic Radio Soleil took the place of those shut down, and on the 7th February 1986, Jean-Claude Duvalier fled Haiti for France, on board a U.S. plane courtesy of President Reagan.

Duvalier returned to Haiti in 2011, at the moment of the presidential election run-off between Michel Martelly and Mirlande Manigat. The Collective Against Impunity was swiftly founded, aiming to hold Jean-Claude to account for the myriad of human rights abuses that occurred under his regime, reminiscent of efforts in Chile against fellow neoliberal dictator Augusto Pinochet. As they struggled to bring him to court, Jean-Claude Duvalier enjoyed the spoils of a “house arrest” that included frequent fine-dining in Pétionville’s restaurants and bars, spending the last of his plunder that had been frivolously whittled down in lavish Parisian spending sprees, and an expensive divorce.

Jean-Claude Duvalier on his return to Haiti, 2011. Amy Wilentz, acclaimed journalist of post-Duvalier Haiti, argued yesterday that Duvalierism lives on, and it is embodied in President Michel Martelly. It is in his interests, she writes, to bury the excesses of Duvalierism away and celebrate the achievements of authoritarianism, as soon Martelly too shall rule by decree. Duvalier’s neoliberal reforms have only continued after 1986, despite the flight of the assembly plants after economic embargos were imposed by President Clinton in the 1990s, during a military dictatorship that deposed Haiti’s first democratically elected president, Jean-Bertrand Aristide. 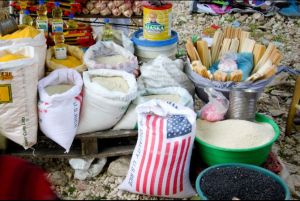 In 1986 the IMF forced Haiti to lower rice tariffs in exchange for a $24.6m emergency loan. The Haitian rice economy collapsed, unable to compete in price with the American rice now flowing into the country. A few years later, Clinton himself offered subsidies to American rice companies to export to Haiti, further increasing Haiti’s economic dependence and accelerating the rural flight to Port-au-Prince, or to the diaspora. The capital suffered overcrowding and an influx of poorly-constructed Bidonville huts. When the earthquake came, they offered no resistance. Yet Martelly, backed by the Clintons, continues to open the border. Haiti, he says, is “open for business.”

Duvalier’s death, like that of Pinochet, denies his many victims and his families the opportunity to see justice served in the courtroom. But history can still hold Jean-Claude Duvalier, and his enduring legacy, to account. Unsurprisingly his death has been met by calls for reconciliation by President Martelly and those who have benefited, or benefit still, from the era of Jean-Claudisme. It is a continuation of a recent resurgence in Duvalierist sentiment, observed by justice campaigner Michèle Montas-Dominique.

“A revisionist discourse has been attempting to rewrite history and to convince the young that things were better under Duvalier.”

To brush Duvalier under the carpet as the weak “Baby Doc” figure, is to silence the brutality of his regime, to forget the hundreds of millions he stole from Haiti, to ignore the damage of forty years of neoliberal economics, HIV and the continuing streams of cocaine that flow through the country, and to spit in the face of his victims. To focus solely on the “positives” of Jean-Claudisme is to sow doubt into the post-Duvalier democratic project, and justify a Haiti that is open for business, ruled by decree.

This silencing cannot be allowed to succeed.

One thought on “The Life and Death of Jean-Claude Duvalier”